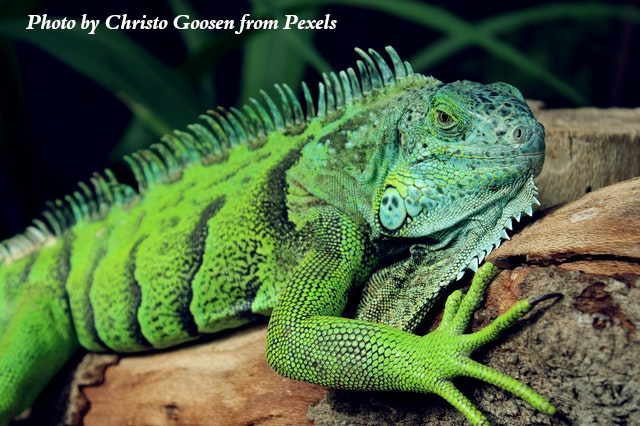 Florida is a “Stand Your Ground” state, and it was just a matter of time before someone used it against, of all things, an iguana. This, according to news reports, happened on September 2nd of last year when 6′-3″, 165lb  PJ Nilaja Patterson, 43, according to the relevant authorities, “savagely beat, tormented, tortured and killed” the iguana in a half hour attack that was caught on video. He claimed to be in fear for his life. He is accused of animal cruelty, which is punishable by up to five years in prison.

Here are some quotes from this case.

His lawyer: “The vicious animal got the best of Patterson and savagely bit his right arm”, Patterson got 22 staples from the wound caused by the “wild beast”.

Prosecutor Alexandra Dorman: Pointing to the 32-minute surveillance video, “at no time was the iguana posing any real threat”, and that he “was not justified in his actions when he kicked this defenseless animal at least 17 times causing its death”. “The Defendant unnecessarily put himself in a position to be bit by this animal,” Dorman wrote. “The State’s position is that Stand Your Ground does not even apply to this case because the iguana is not a human being” and the judge agreed.

Palm Beach County Animal Care & Control SGT. Adam Moulton in arrest report: Patterson “clearly tormented the iguana”and when it tried to defend itself, Patterson went “into a violent rage”, and that patterson “chose to stalk the helpless iguana and deliver vicious strikes to the animal.”

Veteranarian Dr. Virginia Sayre: After conducting necropsy, that the iguana had a broken pelvis, internal bleeding and a lacerated liver, that they were “painful and terrifying” injuries.

Assistant Public Defender Frank Vasconcelos: “He maintains his innocence.” The iguana “leaned forward with its mouth wide open and showing its sharp teeth in a threatening manner.” After being bitten, Patterson “kicked the iguana as far as he could.” “Patterson believed that the iguana could have injected poison in him and thus he rushed to incapacitate the iguana the best way he could in order to preserve its antidote.” “Any force used by Patterson in order to further avoid great bodily harm or even death, was reasonably justified.”

Patterson’s lawyer failed to do his homework. There are no known cases of an iguana ever killing a human being. And what did he mean by “preserve its antidote”?

The green iguana is considered an invasive species in Florida. It is known as “bamboo chicken” or “chicken of the trees” and is eaten by some people. It is herbivorous and many people in South Florida resent them because they eat their plants, burrow under things and poop on their patios. Many people that had them as pets, released them when they got too big, and of course, the released males and females found each other and the rest is history. They are regulars at some South Florida restaurants, where they provide some outdoor “ambience” and entertainment for the guests.

The green iguana is not aggressive. They will run away when approached, however, if cornered, they, like most wild animals will defend themselves. Unlike the Nile Monitor, Burmese Python, African Rock Pythons and Red-tailed Boas (all prevalent in Florida), they are not a danger to anyone’s pet, unless attacked. They are preyed upon by snakes, hawks, and even alligators. They are sensitive to cold and many die off during Florida’s “Winter”.

It is legal to kill iguanas in Florida, the state even asks people to do so, however, it must be done in a humane way, where the animals do not suffer. Death must be instantaneous. For example, shooting an iguana perched on one’s tree with a pellet gun so it falls off and gets attacked by your dog, does not count as “humane”.

Patterson’s attorneys have filed a motion to dismiss the charge, but Judge Jeffrey Gillen denied the motion. Patterson is due back in court on July 30. He faces up to five years in prison if convicted of animal cruelty.

Quote of the Day
Byron Pulsifer
You can't create in a vacuum. Life gives you the material and dreams can propel new beginnings.