How the USO Serves Our Military and Their Families 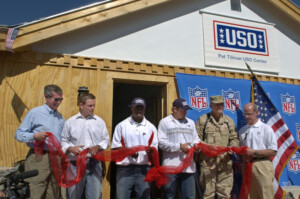 (StatePoint) Since its founding in 1941, the USO has provided generations of service members and their families with crucial support. During that 80-year history, the world, the military and the needs of service members changed. The USO also adapted, adjusting and expanding its operations to help boost their morale and keep them connected to home.

USO centers have provided service members with a home away from home since World War II. Initially housed in churches, stores and other community centers across the U.S., the organization’s network of locations soon extended overseas, with centers popping up in Southeast Asia, the Middle East and Europe as military engagements shifted. USO airport lounges were added in the 1990s to give troops a place to relax during long travels, while Mobile USOs have brought support services to disaster sites and U.S. communities without a brick-and-mortar center since 2016.

It was during World War II that the USO created and established its legacy of entertainment through USO Camp Shows. Since then, the USO has teamed up with hundreds of movie and TV stars, comedians and professional athletes to produce concerts, meet-and-greets and other interactive events for service members. Many of these events are now offered online through the recently launched USO Military Virtual Programming to accommodate new health and safety measures.

Evolving modes of communication have also changed the way the USO helps service members connect with loved ones. Today’s USO centers are outfitted with phone rooms, computers and free Wi-Fi. Many also have dedicated video gaming spaces where service members can play with their spouses and children. New USO programs continue to focus on keeping families connected. The Bob Hope Legacy Reading Program, for example, allows service members to record themselves reading a bedtime story to their child and have that recording, as well as the book, shipped back home.

Over the past 20 years, the USO has added more entertainment and support programs for military spouses and children. USO Coffee Connections, for example, help military spouses build personal and professional networks. The USO Special Delivery program provides both military spouses and service members with free baby showers. In the wake of the COVID-19 pandemic, the USO hosted more virtual and socially distant programs for the military community, ranging from drive-thru high school graduation ceremonies to virtual baking classes.

The USO has also launched support for service members and military spouses as they assimilate into their civilian communities after their military career. The USO Pathfinder Transition Program creates a customized action plan for each participant, assisting in everything from education to financial readiness to career advice.

Visit USO.org to learn more about the organization’s evolution and how it supports today’s military.

“The sacrifice of service members and their families requires that we rise to the challenge as we have done for the past 80 years and will continue to do for years to come,” says J.D. Crouch II, CEO and president of the USO.

Quote of the Day
Sue Patton Thoele
Deep listening is miraculous for both listener and speaker.When someone receives us with open-hearted, non-judging, intensely interested listening, our spirits expand.